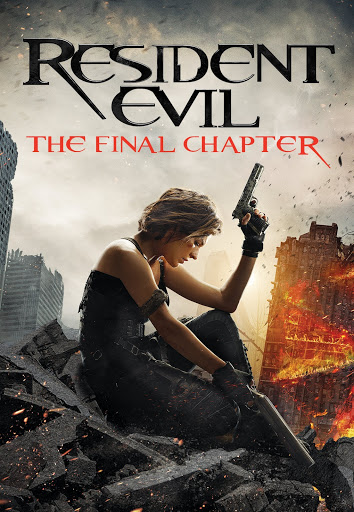 [Edit: this review got picked up by ENTROPY]

At their best, monsters are metaphors for ideas, or cultural phenomena, in Real Life that scare us, from the most basic 'Other'/foreigner to, say, sex/desire in Bram Stoker's Dracula. Zombies seem to have resonated in film more than any other monster in the past fifty years or so, I think because they're such blank slates: just plop them down in a certain setting, like a mall in Dawn of the Dead (1978 or 2004) and bam, you have a movie about consumer culture, and/or about how capitalism is turning us into consuming zombies. Or, my favorites, 28 Days Later and 28 Weeks Later, about AIDS and Iraq, respectively.

The Resident Evil franchise, including this installment, Resident Evil: The Final Chapter, written by Paul W.S Anderson (who has written all of the movies in the series and directed the last two) hasn't ever seemed to go that big, though consider this: The movie starts with Alice emerging from the rubble of Washington D.C. populated by zombies, monsters, and evil Christians. Sound familiar?

The movie has zombies, though they're not the worst thing Alice runs into. The Resident Evil series has always been a mash-up of genre films: horror, monster, science fiction and, to a small extent in a couple of installments, super-hero, when Alice obtains super powers.

The first minute of the movie catches new viewers up to speed on what's going on in the Resident Evil world, though at this point, I'm pretty sure anyone in the theatre will have already seen the previous five installments, since Resident Evil, which started out as, and continues to be, a video game, has always had a loyal following. We continue to follow Alice (Milla Jovovich) and a group of friends (including Ali Larter returning as Claire, though alas, no Michelle Rodriguez) in a world ravaged by the T-Virus, released upon the world by the (stand by for second oxymoron of the review) evil corporation called...wait for it...the Umbrella Corporation. The T-Virus causes people to turn into zombies. Apocalypse ensues.

One thing I've liked in this series is that weird shit outside the realm of zombies happens. The T-Virus may seem to spawn monsters as well, though every once in a while some kind of monster appears, like in Resident Evil Extinction (2007), who seems to have been merely waiting for the zombie apocalypse to happen to crawl out of its cave with a huge meat tenderizer. That plus, like in The Final Chapter, some monsters that seem to have been the result of “bio-engineering” going on before the shit went down. The world doesn't always make sense, be that's ok, neither does ours.

I have always like Milla Jovovich, from The Fifth Element to (I'll face the haters) her role as Joan of Arc in The Messenger. She not Meryl Streep, but she works with what she's got, which in Resident Evil is to be an admittedly hot woman who could kick my ass (said women of which I will always hold a spot for in my heart). If sometimes her lines seem clunky, like they are in this installment, it's more the fault of the script, written by Anderson (who happens to be her husband). And/or the editing/directing, like when plot points and clues get thrown at us twice, just to make sure we get it.

But, we're not looking for art when we go to see a Resident Evil movie, right? Except, what if we could? I think 28 Days Later and its sequel kinda did rise up beyond sheer entertainment. I can't speak for The Walking Dead tv show, though the graphic novel seemed to. But, this is just wistful thinking. I knew what I was getting into: Milla Jovovich and zombies, what could you really ask for?

Jovovich is the appeal of the whole franchise: a strong female lead. Gals want to be her and guys want to do her. Lesbians want to do both. Like Sigourney Weaver, she hasn't ever seemed to break out of that type-casting, though most actresses would I suppose love to be in that position. This seems to be the last installment, at least with Jovovich and Anderson. I think. Unless it's not.

My own unscientific survey of the Resident Evil audience, based on my looking around the theatre before the lights went out, is that this is a good date movie for nerdy fans of the assorted mash of a movie: video game enthusiasts, sci-fi fans, and maybe even a bit o' The Hunger Games idealists.

My short story "Green Arrow Speaks" now up at ENTROPY!

Open All The Boxes: The Barcelona Poetry Festival

My essay "Open All The Boxes: The Barcelona Poetry Festival" now up at COLD NOON: International Journal of Travel Writing.

Walking Barefoot in the Grand Canyon

My poem "Walking Barefoot in the Grand Canyon" now appearing in GRAPH(eeties) #2 from Plankton Press in Tempe, AZ.

Order through the links, but also available in Tempe, AZ, at Wasted Ink Zine Distro. Some copies are at Fantastic Comics in Berkeley, CA, and More Fun Comics in Ashland, OR.