This review will appear in the 2020 issue of Deep Wild: Writing from the Backcountry. Order here!

If there is a patron saint of backcountry enthusiasts, it is Edward Abbey. And if there is a book that has ruffled the feathers of Abbey fans recently (especially men, and especially men who haven't read the book) it's Amy Irvine's Desert Cabal. It's a short, fast, informal, read—perfect, say, for carrying with you into the backcountry, which is where her imaginary conversation with the ghost of Ed Abbey framing the book takes place. Mostly this talk takes place around his most iconic book, Desert Solitaire, though also Abbey in general, all his contradictions and hypocrisies and grumpiness. Desert Cabal is not an attack, but Irvine asks important questions, not just for Abbey but for all of us lovers of wilderness, though she is definitely claiming a place at the table, as an equal, and genuinely wanting to understand a man and writer who meant so much to her.

Each chapter focuses on some aspect of Abbey's thought, with Irvine's commiserations—we get her experiences in, and thoughts about, the backcountry too. And Irvine may prove to be a little prickly to some readers, just like Abbey—she's no fan of Republicans or Democrats, no fan of upper-middle class environmental activists who look down on the working poor while driving SUVs, and she at least has some grudging respect for the occupiers of the Malheur Wildlife Refuge for standing up to the federal government. And she carries a Glock.

Of course, Abbey can't answer back, and Irvine does make some suppositions about how he might react to what has been happening recently, most of which I agree with. The one big one I question is thinking that he in fact might be in favor of Trump's border wall. As evidence, she invokes Abbey's (in)famous quote about sending mexican immigrants back from the border with a rifle and a box of ammunition (which I have always thought is misunderstood by most). My thought is that Abbey would have hated the wall, not because of the humans its supposed to (symbolically, at least) keep out, but because of the wild spaces it divides. Because of the jaguars and wolves and pumas.

The biggest question Irvine has for Abbey, and the biggest revelation of the book, is why Abbey took out references to his wife and children from Desert Solitaire. Irvine has access to the original typed manuscript, and sees first-hand the sentences mentioning them crossed out. As a writer, it's clear she understands the conceit, or concept, of the solitude of Desert Solitaire, the Romantic (with a capital R) experience of the writer/speaker in and against and with Nature (also with a capital). But as a woman, and a mother, she can't help but take that (not just omission, but a) crossing out personally.

We'll never know if by keeping his family in Desert Solitaire whether it would have been the bestseller it was (and still is). My guess? Yes. It certainly would have been different. With the inclusion of those few sentences, the entire vision would have been changed. Which is Irvine's point. She sees a missed opportunity, which women would have seen—saw—automatically: "Solitude, for women, is a different animal entirely." And, a little later: "we [women] seek not so much solitude as solidarity, intimacy more than privacy. But it's the way of wilderness—in a thriving ecosystem, integration matters far more than independence." In other words, what if we'd had a bestselling book that shaped decades of activists and nature lovers which advocated for solidarity instead of a leftover sense of American rugged individualism?

Again, Irvine still values Edward Abbey as a huge, good, influence. I was happy to read that in fact, like me, the book of his that really meant the most to her is his novel The Monkey Wrench Gang, for its spirit of activism. It was there she learned that she "could resist authority...on behalf of...these beloved public lands!"

Which brings us to the 'Cabal' of the title. Irvine prefers the french, and female, version, la cabale, but which in either case is the (perhaps conspiratorial, perhaps witchcrafty) group of us, all, who love the wilderness but also want to save it from our governments (local and federal) and tourists and maybe from ourselves. Her invocation (her 'calling in') to us is the reverse of the famous Abbey proclamation to his readers not to get bogged down in the activist part of life, but to "Get out!" and enjoy the wild. Irvine does not deny that at all, but suggest to us (and Abbey's ghost) that, decades later, maybe it's time to 'Come back!':

"So I say to you, go solo, into the desert. Yes, do this and love every minute. But then come back. Come back to the cabale that has joined together, to save what we know and love." 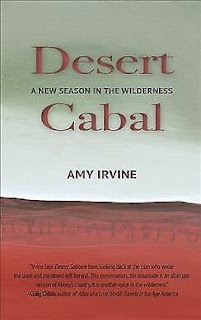