The Sobbing School by Joshua Bennett 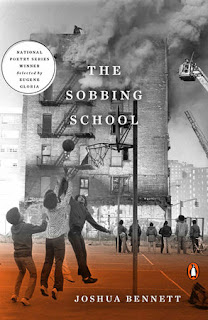 I'm not the first to say that the most exciting contemporary American poetry seems to be coming from 'younger' black writers like Joshua Bennett. The reason seems to be that there is more at stake, that anyone paying attention to the news in the last few years can see race relations are not that good in America, and some of us like to think the poetry could/should be about that, about what's going on politically, socially, culturally, in America or the world.

Whereas, one could be a little cynical about popular white poets so comfortably comfortable in their middle-class-ness that they seem to not have much of urgency to write about, so delve into cleverness, with poems of odd humor that lead nowhere (Dean Young), or sound like pure gibberishness (Charles Bernstein) or go for a pithyness-lite than merely amuses (Billy Collins). Or, while I'm burning bridges, suburban family life (Sharon Olds) or finding life lessons looking out the window at birds (Mary Oliver). All of which culminates in the vague pleasantness of, at its worst, The Writer's Almanac.

I say all this having read and enjoyed all of those poets (except Bernstein) and The Writer's Almanac. But meanwhile, there are other poetries going on taking more risks, because challenging the status quo, challenging white middle-class apathy, which I always thought poetry was really supposed to do.

The Sobbing School is one of the five 2015 winners of the National Poetry Series, chosen by Eugene Gloria, and is Bennett's first book. The title comes from lines by Zora Neale Hurston quoted at the beginning, worth repeating here:

I do not belong to the sobbing school of Negrohood who hold that nature somehow has given them a lowdown dirty deal and whose feelings are all hurt about it....No, I do no weep at the world—I am too busy sharpening my oyster knife.

Strong words, implying, with the knife, a readiness and willingness to strike back at the world, with Hurston's, and Bennett's, knives, of course, words, though Bennett does seem to be jabbing his knife, a little, at those in the sobbing school, those in the black community who aren't sharpening their knives—this made even more explicit by the cover, featuring a photo (credit not given anywhere that I can find) of a building burning in what looks like city projects, while some young black men in the background watch casually and others in the foreground play basketball. The message seems clear: no matter how badly the world of black America is burning—and we all know the cause(s)—there are those in the black community who just watch, or worse, not pay attention at all, not care.

Bennett is known, or has been known, for spoken word poetry, and tours regularly in that capacity (including reading for President Obama!). When I was younger, the poetry slam/performance poetry poets I saw and heard at the Nuyorican in New York and The Green Mill in Chicago were all vehemently, rabidly, anti-academic and anti-intellectual, and from what I've seen of the scene in Portland now, that seems still to be the case. Not that spoken word is exactly the same, but it came out of them, perhaps, and comes from the same aesthetic and, if one were to criticize all three, one might say they put the emphasis more on the performance than the poetry (I asked Saul Williams a Slam Nation movie screening in Chicago once about that and his response was, "The poetry is performance")(or something like that). But Bennett also happens to have obtained a PhD in English from Princeton, making him perhaps some kind of spoken word/academic hybrid.

I'm not sure the poems in The Sobbing School are the same ones Bennett reads in his performance poet mode, nor even if he thinks of himself as having different modes. These don't seem like they would go over well at a slam poetry contest, say, because there's not quite the over the top-ness of emotion and energy and politics and humor, though certainly those aspects are all present. Maybe the closest example of what I think might go over well as performance poetry would be  "12 Absolutely True Facts About Richard Wright":

When Richard Wright was five years old he torched
his momma's living room curtains just to see cinder blacken
his father's hands like the insides of a loganberry pie.

to hoop. Reputable sources swear he was trash with his left.
Richard Wright was born in a hornet's nest. In 1975,
he beat Earl "The Pearl" Monroe in a game of H-O-R-S-E.

Took him for seven large that night on a bad bet.
Richard Wright was a code word & a mountain range
& a treble clef. I tell you, Richard Wright could fly!

Old heads say they saw him soar in circa late summer
of '59, sitting cross-legged & singing gospel
from the saddled back of an inner-city tortoise.

Richard Wright built the White House.
Hammered each nail into place
with his unadorned hands.

The absurd humor, the use of 'chant' repetition, the pop culture references, the conversational language, above all the readability (in both senses of that word, with eyes and out loud) all point to an energetic reading. And yet, I'm not sure the subject matter would go over at a spoken word performance. I'm not sure most spoken work audiences, or poets, know, or want to know, who Richard Wright was. Nor would they get the horse references. I suspect though, that Bennett is probably such a good performer that you might not need to know, that it would be a pleasure just to hear (and see) him.

But there are softer, quieter, poems of Bennett's that would, gasp, almost sound ok on The Writer's Almanac, like "Love Poem Ending With A Typewriter"

And maybe no one's happy,
I think to myself, usually during
the plane ride home or as I read dead French
philosophers on the couch,

only a child's height away
from my girlfriend, who, for real
for real, is a Platonic ideal in her own
right, all any reasonable citizen

unanswered for days. We fit
like the grooves on a bullet.
We both love Rilke & want
children & think furniture

That first line, "And maybe no one's happy" just captures the human condition, period, beyond black and white (or yellow or red or whatever, green and purple) though there's definitely a middle-class feel, which Bennett seems to be poking fun of, a little. That is, poking fun at himself as a former-black-man-of-the-streets-now-intellectual who reads Rilke and Foucault. The one small odd detail that would get this banned from Garrison Keillor's show (and there are others later in the poem) is the "We fit / like the grooves on a bullet" which I'm going to go out on a limb and say most white middleclass couples would not compare themselves too. This is a little reminder, to us and perhaps to himself, that because he's black, his middleclass comfortableness might not be so comfortable, that he'll always be a little closer to (systemic or cultural) violence than any of us, including himself, would want.

If his bio had not told me that Bennett was a spoken word poet, I would have placed him in, or traced him back to, the New York School Poets (maybe fourth generation by now) not just because he lives in New York, but because of two big influences: "Preface To A Twenty-Volume Regicide Note" is a nod to Amiri Baraka, back when he was LeRoi Jones, who I consider part of the New York School, even if some wouldn't because he was/is 'political' and (let's just say it) black. But Baraka/Jones had something in common with Frank O'Hara in his use of common everyday American speech, and that is what I hear/see in Bennett. Take, almost at random, "In Defense of DMX":

No one knows Ella Fitzgerald
was raised in Yonkers,

which probably makes you
the most famous person

if only because of that part in the Grand Champ intro
where your homeboy says, Fact of the matter is, I trust dogs

you should switch out dogs
for written agreements

or Apple products in my case....

Given, this poem is addressed to DMX (Earl Simmons), a hip hop artist, but the 'you' ends up sounding like it's addressed to us, which has O'Hara's 'Personism' all over it, along with the humor and references to popular music and products. Though as Emmett goes dark, in this poem and in The Sobbing School in general (something most New York School poets never did)(though Baraka did, which could be the main argument why he doesn't belong in that grouping)(but still) but he's still being funny, making fun of the fact that he and DMX are from Yonkers, but

....I usually follow up any claim
to our home, our beloved, mutual shame

how it is, Earl. You know nothing beautiful
comes from where we come from....

In this context, in this poem, the 'shame' and 'home' are bigger than Yonkers: Bennett's talking about the larger world, black America, and the shame they're made to feel.

Which brings us back to the Hurston quote, the shame of "the sobbing school" types, whom Bennett wants to deny, but with whom he nonetheless has to at least deal, through anger, or humor. Or Art. Beauty. That's the saving detail Hurston gives us, which Bennett uses: the oyster knife. It can be used for violence, but its main purpose is, like poetry, for finding pearls, beauty, the beautiful. The Sobbing School is a call to get up, stand up, yes, but it is also a reminder to look for the beauty in life. Because, Bennet says, what's a world worth fighting for if there's no beauty?
Posted by John Yohe at 12:10 PM