So many poems about the deaths of animals.
Wilbur’s toad, Kinnell’s porcupine, Eberhart’s squirrel,
and that poem by someone - Hecht? Merrill? -
about cremating a woodchuck. But mostly
I remember the outrageous number of them,
as if every poet, I too, had written at least
one animal elegy; with the result that today
when I came to a good enough poem by Edwin Brock
about finding a dead fox at the edge of the sea
I could not respond; as if permanent shock
had deadened me. And then after a moment
I began to give way to sorrow (watching myself
sorrowlessly the while), not merely because
part of my being had been violated and annulled,
but because all these many poems over the years
have been necessary - suitable and correct. This
has been the time of the finishing off of the animals.
They are going away - their fur and their wild eyes,
their voices. Deer leap and leap in front
of the screaming snowmobiles until they leap
out of existence. Hawks circle once or twice
above their shattered nests and then they climb
to the stars. I have lived with them fifty years,
we have lived with them fifty million years,
and now they are going, almost gone. I don’t know
if the animals are capable of reproach.
But clearly they do not bother to say good-bye. 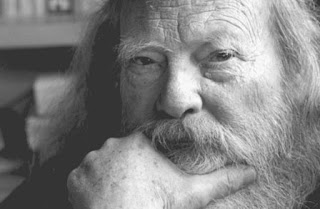