'You gotta carry your shit' might sound like buddhist-like proverb, maybe it is, but in Canyonlands National Park, Utah, using 'poop bags' carrying out your shit is now mandatory for all backpackers. You can complain and shake your head, but I'm for it. This has been a long time coming, and with more and more visitors to the backcountry it's becoming a necessity.

I recently had the chance to try out the two main poop bags, within weeks of each other. I used the Go Anywhere Toilet Kit by Cleanwaste in Canyonlands, and a week later the Restop 2: Toilet-To-Go by the Restop Company in Grand Gulch (part of the new Bears Ears National Monument, for now, managed by the BLM where poop bags are not mandatory, yet). The Restop 2 is packaged like a burrito and has the more professional look, but I prefer the Go Anywhere. 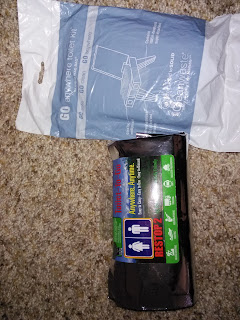 For those not familiar with the concept, both product offer a basic plastic bag to shit in/on, which then folds up and seals with a ziplock-like bag.

There are two main differences. The first is that the Restop 2 unfolds to a sort-of 'bowl': a plastic ring in which to shit, or which 'catches' your shit. I actually found this kind of hard, at least at first, and if you 'miss', things can get a little, well, shitty, though the bag itself is big enough. By my third attempt I was able to get everything in the bowl. (I know I know, I'm not selling anybody on this...) 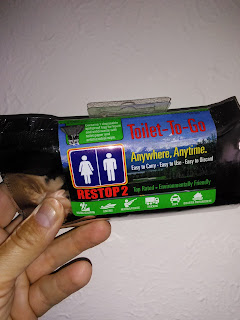 The Go Anywhere be contrast is just a big wide-mouthed plastic bag that you spread out on the ground. Easier to hit, though special note for both: you have to pee/piss separately/before, which requires some muscle control. 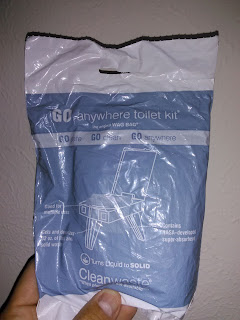 Second main difference: space taken up after the fact. The Restop 2, though looking smaller before use, actually was slightly more bulky after because of the plastic rim. Which becomes a concern when trying to store the things.

With both products, even with the ziplock seal, there is a slight smell if you get close. I recommend having one (or even two) larger plastic bags to put them in. I did NOT put them inside my backpack, but in a larger back pocket of my REI special (which I know now all backpacks have). To my knowledge, my fellow backpackers never smelled anything.

Each unit, for both companies, comes with some TP and a Handywipe. The Restop 2 actually has the best TP. Like, real stuff. The Go Anywhere has what I know as military/firefighter MRE (Meals Ready to Excrete) TP, which is small and thin and rough: You'll want to BYOTP using it.

Despite that, I'd go with the Go Anywhere for my next trip. The places I've checked, which have been Neptune and REI in Boulder, and the Canyonlands Visitor Center, sell one or the other, so you may not have a choice.

Note: human waste shouldn't just go in the garbage. Canyonlands had a special metal mailbox-like thing at the trailhead for immediate disposal. Grand Gulch did not. So...I dumped mine in the garbage of the first gas station I got to. Sorry. But at least I didn't leave any shit in the Gulch.
Posted by John Yohe at 3:18 PM