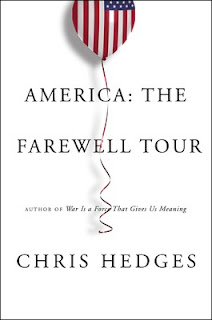 Chris Hedges doesn't mess around in his new book America: The Farewell Tour. He believes fascism is already entrenched in America, that it may in fact be America. And while this thought comes, surprise to no one, as a reaction to the election of Trump, Hedges is one of those troublemakers from the far left (like me) who thinks Trump is an effect, not a cause. He's also not unsympathetic to the working poor, and non-working poor, Trump supporters that Democrats have abandoned. When most writers might put their solutions at the end of the book, Hedges is already offering some general ones in his first chapter, "Decay", while discussing Antonio Gramsci, and Italian Marxist philosopher:

Gramsci would have despaired of the divide in the United States between our anemic left ad the working class. The ridiculing of Trump supporters, the failure to listen to and heed the legitimate suffering of the working poor, including the white working poor, ensures that any revolt will be stillborn. Those of us who seek to overthrow the corporate state will have to begin locally. This means advocating issues such as raising the minimum wage, fighting for clean water, universal health care, and good public education, including free university education, that speak directly to the improvement of the lives of the working class. It does not mean lecturing the working class, and especially the white working class, about multiculturalism and identity politics. We cannot battle racism, bigotry, and hate crimes, often stoked by the ruling elites, without first battling for economic justice. When we speak in the language of justice first, and the language of inclusiveness second, we will begin to blunt the proto-fascism embraced by many Trump supporters.

Hedges earned a degree from Harvard Divinity School, then ended up becoming a foreign war correspondent for the New York Times, earning a Pulitzer along the way. The author of many NTY bestsellers, he teaches at the university level, hosts a show on the RT Network and somehow finds the time to teach in prisons. His style sounds like someone who has come out of a divinity school: When talking with his subjects there's a slight though compassionate detachment. Hedges only occasionally inserts himself in scenes, usually with a pointed question, but there's a warmth and obvious sympathy, and at least an empathy with what might be considered unsympathetic people: he's very aware that the poor white Trump supporters he's talking with are hurting, economically and sometimes physically, from an economy that has left them behind.

America: The Farewell Tour collects a series of ethnographies, a 'tour' of different towns across America, interviewing people feeling the effects of American decay. And at times just seeing the effects on people, is powerful enough. Hedges generally gives little judgment, acting more as a witness, though including historical and cultural context from experts in the related fields. Sometimes though, Hedges provides a little argument, ways he thinks people on the left could be doing things better. His sympathies are definitely from the left, but just as definitely not with center-left Democrats. As a whole, the chapters form a larger, depressing, though honest picture of what's going on in (i.e. what's wrong with) America. That is, what's been wrong with America for a while.

Hedges is at his strongest when he's basically just listening, letting people speak, but when he does have an opinion, he's made some enemies on the left for it, especially with the antifa movement, which he discusses in the chapter "Hate". I'm sure readers are familiar at least with the basics of the group, that they're 'anti-fascist', and that they are an aggressive response to the white supremacist demonstrations, like the one in Charlottesville when Heather Heyer lost her life.

Hedges was on the ground at the protest, talking to the white supremacists, who don't come off well. But neither do the antifa protesters. Their basic argument is that they need to wipe out the neo-nazis and white supremacists in these smaller rallies before they get bigger, that if people had just done that back in 1930s Germany, the Nazis would never have come to power. But Hedges, being a good historian, points out that in fact people did try to do that back then, and it was fear of militant, an violent, leftist protestors that drove people to the apparent stability and strength of the Nazis. Hedges fears the same here. Also, aside from the basic arguments about the right for anyone to have free speech and free assembly (meaning especially people who you don't agree with) guaranteed in our Bill of Rights, he argues that using any kind of violence during protests is actually an ego-trip that becomes more important than what people might be protesting for. Hedges uses a quote from another Italian writer, Ennio Flaiano, to sum it up: "There are two kinds of fascists: fascists and anti-fascists."

For making argument like this, his classes are protested and disrupted by the antifa folks. This left vs. left infighting reminds me of the Marvel Civil War comic book series, when Captain American and Iron Man and their respective teams fought while the Green Goblin took over. Except we have the Orange Goblin.

The irony is that for Hedges, in America: The Farewell Tour, it's already too late. Fascism, in all its forms, is already thriving in America, a view which he shares with his antifa protestors. I'm not sure. Maybe I'm in denial, but the fascism scare here reminds me of the whole Russia scare that's been going on in the MSM. The difference, of course, is that the liberals/democrats who talk of fascism and the Russians stealing our elections do so to distract and avoid blame for their own destructive and/or lame policies. Hedges isn't trying to distract, he really believes it, and believes the democrats are complicit, which is why he's not otherwise embraced by the mainstream media.

Hedges' ethnographic approach works less well when he delves into sex, and pornography, and prostitution, in the chapter titled "Sadism". His cause-and-effects are weaker, at least between the sex and everything else. He begins this part of his tour of America taking a couple classes on kinky sex at the former headquarters of kink.com in San Francisco, which Hedges plays/writes straight, just regurgitating what the 'instructor' says, though I'm not sure if his intention is to shock or amuse. But that's not even the (unintentionally?) funniest part of the chapter, which is when he writes a couple play-by-plays of scenes in porn movies. I wish David Foster Wallace was still around to handle this stop on the tour.

The powerful part of the chapter is about those subjects. Hedges, though, downplays/negates his previous cause-and-effect for what I think, and I think he really thinks, is the real cause of prostitution, which to nobody's surprise is economics: poor women, and some men, end up in prostitution as a way to make money, because they don't have any other options in our beloved American (non)welfare system, though as Hedges shows, convincingly, no one knows how bad it can become, and they can/will be lied to and forced to do horrible things.

Though America: The Farewell Tour does depressingly feel like a farewell, to perhaps literally the existence of America and at least to the idea of America as a great nation and certainly to the idea of America as a respected power in the world, Hedges has some hope, detailed in his final chapter "Freedom", with activist groups such the Catholic Worker Movement, Earth Quaker Action Team, Hands Up United (in Fergeson, Missouri), The Free Alabama Movement (organized by prisoners within the prison system) and the Standing Rock Water Protectors:

The resistance by the water protectors at Standing Rock provides the template for future resistance movements. It was nonviolent. It was sustained. It as highly organized. It was grounded in spiritual, historical, and cultural traditions. It grew organically out of community. And it lit the conscience of the nation.

The key word there is community, and not the kind you find online: Hedges doesn't have much faith in internet activism. Nor for mainstream politics. Despite what people would have you believe, especially after the 'blue ripple' of the mid-term elections, voting is not what will effect true change:

Resistance...will come from outside the formal political system. It will not be embraced by the two main political parties or most institutions, which are under corporate control....We will have to build new, parallel institutions that challenges the hegemony of corporate power. It will not be easy. It will take time. We cannot accept foundation money and grants from established institutions that seek to curtail the radical process of reconstituting society. Trust in the system, and especially the Democratic Party, to carry out reform and wrest back our democracy ensures our enslavement.

This process of institution building permits organizers and activists to eventually pit power against power. Politics is a game of fear. Those who do not have the ability to frighten power elites do not succeed. All of the movements that opened up the democratic space in America—the abolitionists, the suffragists, the labor movement, the communists, the socialists, the anarchists, and the civil rights movement—developed a critical mass and militancy that forced the centers of power to respond. The platitudes about justice, equality, and democracy are just that. Only when the ruling elites become worried about survival do they react. Appealing to the better nature of the powerful is useless. They don't have one.
Posted by John Yohe at 10:45 AM