"Holy Water" appeared in the anthology ON FOOT: Essays on Hiking in the Grand Canyon from Vishnu Temple Press.

Back at camp, I set up near the creek, and dine on more cheese and crackers, dreaming of the decadence of river runners carrying coolers and coolers of iced foodstuffs, barbequing steaks and veggie burgers and drinking lots of cold beer. With plenty of sunlight still available, I’m tired, wanting to sleep really, but go down and do my best imitation of a crane, standing knee-high in the water and observing small fish jumping out, catching mosquito-looking bugs hovering over the water. One brave fish actually throwing itself onto a rock, trying to catch flies sipping at the stream edge. Plus, a stillwater pool of tadpoles, not moving much, just floating, maybe feeling the changes coming on, the appendages starting to grow. One big one hanging out at the edge, facing the dirt, as if hearing the call to crawl out of the slime. That's how I felt in high school.
Back in camp, air mercifully cooling down, sky deep blue, wispy pink cloud lines, then dark. Fat moon already glowing. Rapids both up and downstream. And here come the bats! I lie naked on my sleeping bag watching planets and stars appear. Sky clear, no clouds. A light down-canyon breeze, warmer than the cool air settling in the creek bed. And more frogs! Another spring peeper choir to sing along with the crickets. What's missing is coyotes. Would be nice to hear them singing too. And wolves!

Morning sun almost over a nearby butte, which makes me think I must have slept a long time, but no, only six o’clock. Time flows differently here in the Canyon. Sad to leave Shinumo Creek and its good water. Not sure if I’ll be near it down at the Colorado or not. I can always filter river water, but I'd prefer this pure creek soma. Not quite goodbye, though. First, some creek crossings which, earlier in the year, with snowmelt off the North Rim, could even get sketchy-dangerous. Even now, a wrong step, a slippery slip, could put me face down with a heavy pack on, so I stay mindful.
And, even though I’m expecting it, I’m still surprised to come on Bass Camp, maybe because I was expecting some kind of structure, a shack or something. In fact, it's a cave-ish area under a big north-facing perpetually-shaded overhang. This Bass guy was one of the big (white) explorers back in the day, and owned a ranch over on the South Rim (which the Bass family still owns and runs), and had guests and customers over to this side, for hunting, and maybe just as the first tourists. This 'camp' still includes a collection of old tools—an axe head, three different pick heads, a stove, some pry bars, plus a bunch of glass fragments from really old bottles, all laid out on some benches. The hard thing to believe, although the guide books say so, is that Bass had an orchard here, with apple, peach, and fig trees, whereas all that's here now is some mesquite and cat claw, on sand. Can peach trees grow in hot desert sand? But how amazing would it be to sink my teeth into a nice juicy peach right now?
This is the last place to fill up my bottle and dunk my head before the push for the Colorado. And the sun is a hot bastard. I dunk my t-shirt and floppy hat in the water, as well as my head, for some evaporation action as I continue on the trail, which soon splits: The path-most-traveled heading up and over a pass to, supposedly, sandy beaches. I'm sorely tempted to just stay on the path-less-traveled following the Shinumo, but I’ve heard rumors of women in bikinis on those beaches. That is, the possibility was mentioned, and it has become a Great Promise. Maybe I’ll even encounter one of those all-women groups. Good odds! Surely one would want to rebel against all that women's empowerment energy and invite a scruffy backpacker dude into her tent. And anyways, why couldn't that be empowering?
But first, up 700 feet—a good dry run for the hike out, and yeah, it's hot, and yeah, it's uphill, but in fact after a half hour, lo! Thar be the mighty Colorado down below! A shiny, wide, deep green strip curling through red-brown and black rock, two sets of mild rapids visible, and glimpses of white sandy beaches (so it's true!), with a flotilla of rafts even gathering above the top rapids! I descend, switchbacking through shale, watching them take the whitewater one by one. Lordy, that looks so much more fun than hiking in the desert with forty pounds on my back right now.
At the bottom, another fork: One way going down to the main, bigger beach right below, where the rafters usually camp, but there’s another smaller beach just below the top rapids, and I love the idea of a beach of one’s own, though that lowers the chances of being invited for dinner and beers by bikinied vixens. Sigh. I hike the extra mile upstream, and find a little trail that weaves down onto a beach, with bonus little shady cliff overhangs. I drop pack and shed clothes asap, heading to my baptism. By the way, that sand is blazing hot! No stopping now, though! I get on a rock bluff, the water clear and deep below, and dive.
Holymotherofgod it's COLD! My appendages, all five of them, throbbing. But I swim! Not too far out: the strong fast current a wee bit scary. Would be really cool (and dangerous) to go all the way to the other shore, but that's just not possible here. These little beach areas are hemmed in by tall rock ledges, especially on the south side.
I reach the shore and pull myself out of the depths, out of the water, and rise, naked, reborn. This is it, the holy land. Cliff walls and mountains rising up all around. The wide green Colorado, rapids and clear sky. The enormity of this Canyon, and this River that carved it, and the Time it took. Hallelujah! 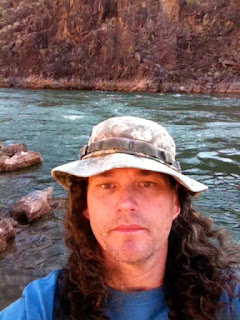