The catwoman alone in the corner. He approached and asked if he could talk with her. She sipped her sangria from a plastic glass and the left side of her mouth curled up a bit. Sure.
I don’t normally approach strange women at parties but my girlfriend is mad at me and taking it out by talking to other men.
Which one is she?
The dominatrix.
She scanned the crowd. Which one, the one with the whip or the one with the riding crop?
Oh, sorry, the one with the riding crop talking to the fireman and the army general.
She’s pretty.
Oh well thanks. But you know, looks only go so far sometimes.
What did you fight about?
Oh stupid stuff. Like on the way in on the tollway when we got near the baskets, you know, where the coins go in? Well she tells me, you have to put the coins in the basket, and I’m like, I know I have to throw the coins in the basket.
I see.
Like I’m stupid or something.
Nice dress by the way.
Thanks. These shoes are killing me though. I don’t know how you women do it.
Stockings or pantyhose?
Pantyhose. With a lace panty.
I’ve always liked the black-seam-up-the-back-of-the-leg look.
Me too. Are you here with someone?
Yeah. He’s the sixties hippie over there arguing with Albert Einstein over whether as a Buddhist he can be for the war on terrorism.
Oh, so you meditate?
When I can. He goes to the zendo more than I do.
And so do you like cats?
Yes, I have two. Their names are Boots and Scarlet. How about you, are you a dog or cat person?
Cat person I guess. I have this theory about women with pets. Would you like to hear it?
She looked around the room. Sure, why not?
I think women want men to be like their pets. That is, you know women who like dogs like their men to be like dogs and always be around and happy and give them unconditional love even if she’s scolded him or something.
She raised an eyebrow and twitched her whiskers. Interesting. And cat women?
Well, cats are more independent, they like to go off on their own and prowl and hunt, but they still like to come home and sleep on a warm lap. So women who like cats like men like that.
So what does your girlfriend like?
Um, actually she likes horses.
Shouting from across the room. You’re wrong Albert! The only way to show those bastards we mean business is to bomb the shit out of them!
She covered her face. Oh god, he always does this to me.
He’s certainly a loud Buddhist.
He’s like that when he meditates too. I call him the Heavy Breather. It’s like he forces his breath out to show off how good a meditator he is.
She threw her empty cup on the floor and crushed it with her boot. Her tail twitched. So do you want to leave and go back to my place?
Um, well my girlfriend....
She just went into the bathroom with the cowboy.
Oh. Well ok. Let me grab my purse.
They said goodbye to Malcolm X and Barbarella and went out to the street, taking his car.
Where do you live?
Just get on the tollway.
They waited at a red light. A car full of young men pulled up to them and one of them whistled.
She laughed. They must think you’re really a woman.
The light changed blue like an orange and he got on the on-ramp heading away from the city. She groomed herself, licking her tail. Oh, and those baskets? You throw the coins in them, Stupid.
The stars were out and he drove to the suburbs. 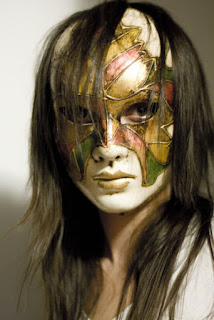