The Day of the Triffids by David Wyndham

This review-essay appeared in 2015 at Word Riot, which is now gone, alas. 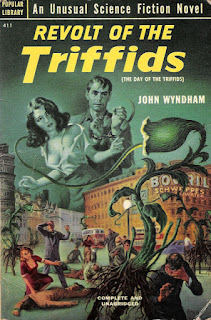 I would be surprised if anyone reading this remembers The Day of the Triffids, or has even read it—it was out of print in American for many years. The copy I found in the late 70s was an old paperback already, in my parents' eclectic collection—probably my mother's, though maybe actually my father's, from back when he still read books and hadn't yet succumbed to the great god Television. The Day of the Triffids was the first 'adult' novel I ever read, which, I think, was what attracted me to it—certainly wasn't the Hardy Boys or Old Yeller, though, like a lot of science fiction, neither was it inaccessibly difficult for a ten or twelve-year-old—not one of my mom's eastern religion books, or The Brothers Karamazov. Maybe it's because you always remember your first, but in the deluge of sci-fi and fantasy books I read in the years after, I never quite forgot Day of the Triffids, and after reading a crop of recent dystopian novels, all now mostly classed at YA, like The Hunger Games, World War Z, Divergent, Feed, and others (there are a lot of dystopian YA novels nowadays), and having discussions about formative books with my friend Jen, I had to go back and see if 1) Day of the Triffids still held up, and 2) I could learn anything more about myself, and my younger self, from what I was reading back then.

The story begins with the main character and narrator, Bill, waking up in a deserted hospital, after being unconscious for a while, and learning that while he was out, most everyone in the world has gone blind, and that not only that, what everybody took for non-sentient genetically modified plants have pulled up their roots and begun to hunt. I know, I know, in these days of zombies and vampires, the idea of killer plants doesn't sound so killer, but if one is willing to suspend their disbelief about zombies, a killer plant dystopia is at least as plausible. I couldn't have told you then why Triffids imprinted itself on me—the immediate thrill was imagining what I would do if I were one of the lone survivors of the destruction of human civilization—which is still true with the current crop, but as anyone who has thought about science fiction (meaning, I guess, trying to justify it to myself) will tell you, those dystopian worlds are stand-ins (not quite metaphors) (maybe fables) for our own world. In fact, those worlds do not seem so different to us readers than our own world. I read Triffids maybe at age eleven or twelve, not entering a new world but no, feeling that the world had changed. With puberty, I felt like I was waking after being unconscious for a long time, into a mostly deserted world run by things I'd thought of as weird and harmless (adults, and humans in general) but who were in fact scary and dangerous. Also, the people like me, the left-over puberty survivors, were mostly blind and helpless and, if I wanted to survive, I very quickly needed to find others like me, who could see. Also, once I realized that I liked what was called 'science-fiction,' I had a place to go, that I belonged somewhere: in the science-fiction section of the bookstore. Once I started carrying science-fiction books around at school, I began to find the other survivors—kids, mostly boys (though girls, I sensed, weren't killer plants)(or mostly not—cue Newt from Aliens: “Mostly....”) who were reading similar books, and these texts gave us a 'secret language' that the triffids couldn't understand.

The Day of the Triffids was written by David Wyndham, real name John Wyndham Parkes Lucas Beynon Harris (!), a British science fiction writer who's other works I've never heard of. He was apparently quite well-known in the 50s and 60s, and though he died in 1969, some of his posthumous writing has been published as recently as 2009. Still popular and read in England, his books went out of print here in the States, until recently, when Triffids and his other most popular novel, The Chrysalids, were re-issued, by The Modern Library, both under the label of a “20th Century Rediscovery.”

What I didn't remember, and maybe just didn't consider back then, was how much the novel is less about the weird evil flesh-eating triffids, than about humans, and Wyndham's thoughts on how exactly humans in a post-disaster world would re-form and survive. Most dystopian books present one form, one way, that the author thinks humans will govern themselves, or, usually, be governed. Wyndham presents many, using the structure of the book, with Bill traveling around England to various groups of survivors, as a way to present different philosophies about the best way to survive: Some as anarachic/communal groups, some as smaller family-sized units, and some (the really bad guys) going back to a form of medieval feudalism, with sighted people ruling estates of blind serfs (who will be fed on ground up triffid gruel). What I like about the novel is that Wyndam's characters have some actual intelligent conversations about the pluses and minuses of each form of government, though, interestingly, the increasing number of triffids force Bill and his fellow survivors to opt for larger groups, with larger areas of protected land.

What the few sighted people do, or don't do, with the now blind rest of the population becomes the big question. Do they take the truly compassionate route, and try and help everyone? Seemingly impossible, and endangering everyone, especially, as if blindness and carnivore plants weren't bad enough, with some kind of sickness, which may or may not be typhoid, or the result of biological weapons, ravaging London and other larger cities. Or, cut their losses and regroup in smaller groups with other sighted people, knowing that the blind people left behind will suffer and die? Not easy decisions, and no decision any character makes in the novel is without some dialogue with another character about its feasibility and morality. Even the 'best' guys (there are no real good guys) that Bill and crew join up with are not without some disturbing new rules, and in any case, in any variation of post-disaster re-organization, the general lot of women seems to always end up as baby-makers, which is the one conversation Wyndham avoids, by having even the main female character, Josella, an independent and intelligent woman before the disaster, and a writer of a novel that seems to be the equivalent of Shades of Grey (ultimate male science-fiction nerd fantasy: to be trapped in a scary new world with a hot female porn writer), happy and willing, and even looking forward to, having babies.

Re-reading Triffids now, I'm just struck at how seminal it was: its influence shows in all kinds of books and movies now, from Invasion of the Body Snatchers, to Stephen King's The Stand, to José Saramago's Blindness. One of my favorite zombie movies, 28 Days Later (screenplay by Alex Garland, another brit, who wrote The Beach) begins with the same premise of (and I take as an homage to) Triffids: a man waking up in a hospital after an overnight disaster, to find himself one of the few survivors). In fact, I think the whole zombie genre premise (ie zombies spread over the world, small groups of humans survive) comes from Wyndham's novel: just substitute killer plants for zombies. Or apes, say, in Planet of the Apes. Apes and especially zombies seem to make for a better metaphor (for example, racism/slavery, capitalism, AIDS, the invasion of Iraq) though who knows, with the now almost common, though still scary, genetically modified foods, care of the Monsanto cabal, maybe the triffids' time is close at hand! Maybe not even as metaphor!

And what did I learn about my younger self? Well, obviously, the world was full of metaphorically helpless blind people, and metaphorically evil triffids, and I was on my own, surviving the disaster called 'growing up.' And some of my fellow survivors might not be the nicest people either. Nor did compassion for the blind seem to be enough. In fact, it might have been too much: That, to have compassion and try to relieve the suffering of all the metaphorically blind people in the world would make me triffid food. No, best to withdraw, with a few like-minded souls, if I could find them (and especially with a woman who writes porn) and live on an island, where we could survive, and (maybe) figure out how to rid the world of triffids, and repopulate it with our metaphorically non-blind children.

Nothing has changed. I still feel this way.
Posted by John Yohe at 11:42 AM