The Palace of Illusions by Kim Addonizio

This review originally appeared in 2015 at Word Riot, which is now gone, alas. 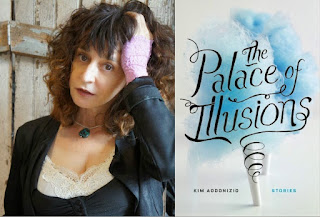 Kim Addonizio's writing goes for the guts—punches of raw common american language, about raw common human relationships, that are also, at times, funny and sexy, with touches of all her street-level poet heroes, like Charles Bukowski, Frank O'Hara, Anne Waldman and (early Satan Says-era) Sharon Olds. I have up to this point mostly thought of Addonizio as a poet, though she has written some novels, and her first collection of short stories, in the box called pleasure, is as unapologetically in-your-face as, say, Denis Johnson's Jesus' Son, and I love it. It gives her room to work even more in the lower-class blue collar divey world that other underground writers like Bukowski and Hubert Selby Jr. make, if not beautiful, then interesting and sympathetic, and Addonizio, like them, may be showing her (unconscious or not) street Buddhism by showing how beauty can be found anywhere, that the lotus grows in mud.

But now I've shifted how I think of her, as not just a poet, but a writer in general, like Bukowski, because because of her new collection of stories, The Palace of Illusions, out through Soft Skull Press. Some of the stories, like “The Other Woman” and “Blown,” are similar to those in in the box called pleasure—short, fast, and powerful, from the POVs of trashy young women involved with trashy men (some not-so young) the results of which we readers know are doomed, and that they're bad choices. Actually, even the protagonists seem to know that they're making bad choices, and yet seem powerless to choose otherwise, which is how you might determine whether you'll like Addonizio or not: Is that how Real Life feels to you? Kinda out of control, at least temporarily pleasurable, and full of suffering?

Importantly though: even as bad choices are made, none of the young women protagonists refuses to accept responsibility for their actions, which they could in some cases very easily do, like in “Intuition,” when an older married man is breaking up with fifteen-year-old Faith, she briefly thinks about what would happen if she just went public with their affair, and how she could destroy him:

“I sit there, turned away from him on the swing, holding the knife I my lap. I cold turn, before he gets up, and stab him in the heart, and then he really would be dead. I could get away with it. I could say, He touched me between my legs. He forced me. He took me to the Tip Top Motel, and he said he would hurt me if I ever told. Everyone knows what men to to girls; people would believe is was self-defense. No one would know the truth.” (183-4)

But, she doesn't, which is why I like her—or, well, at least sympathize with her—and other Addonizio characters. It's not so much about ethics—Faith, obviously, doesn't like the man anymore, and has lost respect—but 'owning' your actions, realizing the inevitability of effect, from a cause that she, less than he, put in action. Which might horrify some readers, or make them go tsk tsk, but whatever Addonizio's characters are, they're not victims, or they don't think of themselves that way, and her stories are not about being politically correct.

“Intuition” is my favorite story in the collection. It's got the gutsy darkness of earlier Addonizio stories, but it's longer, and more in depth. If earlier stories (and, again, some in this collection) are more similar to her poems—capturing a short moment in time—this story has time to build, and has great passages like this:
“The thing is, you keep hoping. With each boy, you think maybe it will happen: he'll look at you a certain way, he'll get you, and your search will be over. I've been searching since I was thirteen, with one boy after another.” (163).

Hard to remember maybe (though funny too) that that's a fifteen-year-old-girl speaking, and yet Addonizio's talent (and this goes for her poetry too) is that she can write something in plain american speech that sounds easy to articulate/write/say, but isn't, and yet captures how anyone, fifteen to fifty, really feels, even when they're fucked-up messes: they still capture very human situations and feelings.

Other stories in The Palace of Illusions are more along this tone and strategy. Some would say they're more mature, but that would imply Addonizio's shorter pieces aren't as good. They're just different. Still, she is experimenting with a more formal, controlled, style. What these stories remind me of is City of Boys, a collection of short stories by Beth Nugent, which I thought was one of the best books of the 90s, though Nugent dropped away after that, and it's out of print, so I'm not sure many readers will get that comparison. But Nugent was coming from Hemingway's darker short works, and Marguerite Duras, and Joyce Carol Oats, as is Addonizio.

She's also experimenting with different ages, both younger—with the poor girl from “Beautiful Lady Of The Snow,” who you just want to hug and take far away from her mother and life—and the nameless woman in “In The Time of the Byzantine Empire,” the middle-aged academic that proves making bad choices is not just the domain of young people. And there's an older character, Ruth, in “Cancer Poems,”dying of cancer and taking a community college poetry class in order to maybe write a book she can leave behind for her granddaughter.

Addonizio is also, in a few stories, experimenting with fairy tales, and one vampire. These interest me less, though I acknowledge that other readers might find them preferable to the punch-in-the-guts stories. And even whe Addonizio writes about seven dwarves, say, her narrator still talks/sounds 'street smart'. The vampire is a teenager in college. Or, she's half-vampire, her dad is full vampire. The details are less important than the effect, of an insecure young woman with low self esteem, who can still, with (dark) comedic effect talk about stalking people to drink their blood.

Addonizio apparently being Addonizio, none of the characters in The Palace of Illusions (with the exception of Ruth, the cancer non-survivor) is what we'd call likeable. Relatable, yes: we've all done things in our lives that we regret or are not proud of (ie, we're fuck-ups just like everyone else)(or we feel that way)(or I do—if you don't maybe this collection isn't for you and you can just renew your subscription to The New Yorker). So, sympathy, yes. Pity, definitely. Interesting, for sure. And these types of characters can be harder to stay involved with beyond a short story. The one Addonizio novel I've read, My Dreams Out In The Street, I found difficult, not because of the style but because of the two main characters, and the awful choices they make in their lower-class lives. They're interesting, yes, but following them for two hundred pages and continuing to feel any kind of sympathy is a hard ask, though it apparently has a cult following.

Addonizio also written two fairly popular and well-received 'how-to' books on the craft of poetry, Ordinary Genius, and A Poet's Companion, co-authored with poet Dorianne Laux (another street-ish poet, though more interested in the erotic than the rough) both of which include short essay-chapters on writing as a process and way of life, as well as exercise-prompts that could be used on one's own, or in poetry workshops. What I would love is to read some critical essays from her, in maybe the style of Tony Hoagland, just to see how she thinks about other poets and poetry, though the truth is I'd just love to read anything by her.

Actually what I'd really love to do is jam with her sometime, since she also plays blues harp (harmonica) in a band and at open mics, and this seems perfectly fitting—she's not pop (too shocking and rough-edged for the prudish mainstream) and she's not jazz  (though she has an improvisatory fun feels at times, her subject matter is too dark) and neither is she heady classical (no 'too many notes' texts here—stark versus ornamental). No, her writing is from the bars, from the blues that come from real human working class relationships—the sadness and sexiness and fucked-up-ed-ness of things never quite working out, as all relationships never really ever quite work out, even when they do (and they don't).

After reading the last installment Best American Short Stories, I feared that I was losing interest in short fiction, period. But Addonizio restores my faith and interest. Good edgy fiction is out there, with publishers like Soft Skull Press, we just may have to search a little harder. That said, I don't know why The Palace of Illusions wasn't picked up by a bigger publisher. For all that I love Addonizio's underground feel, that's me being like those music listeners who like their underground bands to stay underground, when really it feels like she's about to explode.

—John Yohe
www.johnyohe.com
Posted by John Yohe at 11:35 AM