I decided to read Jade Sharma's Problems because Coffee House Press is selling it as “girl meets Trainspotting,” and Trainspotting was one of my favorite books of the 90s, because it encapsulated the seedy underbelly of the supposedly prosperous 90s for the western world. I was entirely ready to be disappointed with Problems, since that's a lot to live up to. But I'm not, I'm not disappointed at all.

Maya, the narrator of Problems, is mostly unreliable. One page she's telling us (or maybe herself) that she only 'chips': snorts heroin no more than two days in a row, while a few pages later she's telling one of her best friends that she's done it ten days in a row. She's lying to somebody, probably her friend, who herself is a 'successful' magazine editor also with a heroin/crack/whatever addiction: Maya’s friend  needs the drugs to get through her job, and needs the job to buy the drugs. Thus is Sharma's critique of hipster life in New York (and maybe the rest of the country, or world).

The most radical fact about Maya, even more than her snorting heroin, is that she's an Indian-American, as in from the Indian subcontinent, snorting heroin. Or, half-Indian, but just like with Barack Obama, in America, if you're half/mixed, then you're considered, even by yourself seemingly, as belonging to the darker half. In any case, Maya dispenses with her Indian-ness fairly quickly, or wants to, and for most of the book describes herself as “brown,” making her(self) a member of the 'ambiguously brown' minority-majority that can include native-americans, latinos/hispanics, middle-easterners, mediterranean-ers, anyone not 'white' or dark.

Given, Maya is on the surface, on that façade, living a middle-class life: ostensibly going to college, getting a PhD, and in conversation with her mother about apply for college teaching jobs. But the car wreck that we readers are slowing down to look at in Problems is whether all of this is going to fall apart for Maya. One suspects yes. The 'how' is the fascination, with the 'why' kind of secondary, because that's another part of the critique that Sharma is offering: the hipster lifestyle of New York and elsewhere is all just as much a façade as 'regular' middle-class-ness, and not sustainable:

You can't help the truth, the mundane details that frame people's perceptions of who you are, like where you were born, what your father does for a living, how many siblings you have. In our lies we offer the world a presentation of how we would be if we had complete control over our existence. That's why it's so embarrassing to get caught in a lit. It offers a glimpse into how you want to be seen. Those are the things I am insecure about. You take things off the table, clean up your stories, edit out the parts that don't make sense, and think, Now that's better.

What's interesting is that for Maya, drugs are the least of her problems. Whether that's true or not is a question, but Problems could exist as a story without the drugs, in that Maya certainly has other problems, including (but not limited to) body issues, and race issues, and daddy issues, if it were just about these things the book might verge on up into basic chick lit, whereas really it's kind of the anti-chick lit novel, or the novel for all the real women out there who can't afford to just up and head for Italia to eat, drink and pray when some dude breaks up with them.

But it's in the body issue rants or self-critiques that I feel like I'm getting a glimpse behind the curtain at what all women go through, though female readers will probably be like, 'yes, thank you, finally someone finally putting this shit on paper!' Maya feels she can't win, even from the beginning, because she's brown, and white women don't have any problems (which, is absurd, and shows how much she's in denial, because she describes white women she meets in this hipster drug world, and anyone but her can tell they're fucked up too). But I get it when Maya says she hates her big breasts and the fact that she has no ass, and wishes she could move all the weight from her top to her bottom so she could have a nice juicy butt like other women. I get that there surely is some other woman who just as strongly wishes her butt weren't so big, and that her breasts were. You can't win as long as you're playing the game of guessing what men want, of having men (even hipster men) in the position of power to be the Deciders about what looks good in women. Thus, problems.

Having a sympathetic character who is kind of a fucked up and unreliable and a liar and a drug (ab)user is tough to pull off, especially for the length of a novel. Irvine Welsh did it in Trainspotting by having multiple characters, at least half of whom weren't totally dislikable, merely pathetic. Also, he captured the world of the characters, lower-class life in economically poor Scotland of the 90s, which was kind of exotic for someone like me. The hipster drug culture of the now in New York City is also kind of exotic for me, though less so. And, both books are funny. Like this:

You live in New York, and you're so cool. You have an apartment in the East Village, and you call yourself an artist. But after a while, you forget what it was you were so excited about. There is nothing here for you. You feel like a sucker every day paying fourteen bucks for a pack of smokes. You take stock of your resources, and you don't have anything. You call yourself an artist, but you work fifty million hours a week just to sleep in a room where only a bed fits. You go to bars where you can't sit down or hear anyone talk. You're a hipster in New York City. There are a million of you, and it doesn't matter that you believe you're talented, because no one cares and you're only getting older. The thing you didn't realize when you were fourteen and thought Kurt Cobain was God was that not every weirdo with an ironic tee from Urban Outfitters makes it. There are a lot of people in their sixties, toothless, broken, and poor, who have stories of almost making it. At what point do people hear “loser” when you say “artist”?

Problems is a sign of the times: a (dark) satire, a tragedy, and a critique of something bubbling under our supposedly back-to-normal economy, where those that are still nouveau-riche-y middle-class are not that far from a hard fall into crack-whore-dom.

But still, even with Maya's problems, what I like the most is that she's unrepentant, and refuses to see herself as a victim. Her problems are her own, and she's dealing with them, and she won't take your pity. We may not agree on how she's proceeding, or if she's proceeding at all, but she is still smart, and able to laugh at herself. And if she's lying to herself as well, well, don't we all. In this she's like the characters of another favorite author of mine, Kim Addonizio, though Addonizio is stronger and more successful in the short story form. Sharma makes Problems move right along with an almost (but not quite) collage style similar to David Markson, or some Vonnegut (like in Hocus Pocus) and maybe most especially Charles Bukowski.

And so there: I've just compared Jade Sharma to four of my favorite writers of all time. I've been grumbling to my friends lately that I don't seem to like reading fiction, period, anymore, but Sharma gives me hope. I think it's that dark, seedy, satiric novels like Problems just aren't considered marketable by the Big Publishers, gone are the days when Hubert Selby Jr. was a bestseller. And so I can't find any novels like this anymore. And probably the Eat, Pray, Love crowd would not like this book. Though, that said, fans of Cheryl Strayed's Wild might. Thankfully we have indie publishers like Coffee House who will take chances. Although, they're not taking a chance. They have a great book on their hands. and they know it. 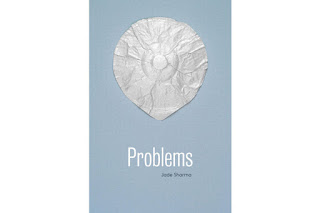