What I've Stolen, What I've Earned by Sherman Alexie

My review of "What I've Stolen, What I've Earned by Sherman Alexie" appeared at WORD RIOT (now defunct) February 2014.

As a break-out short story writer, then a break-out screenplay writer, then a novelist, and most recently a National Book Award-winning author of the YA novel The Absolutely True Diary of a Part-Time Indian, it's easy to forget that Sherman Alexie started out as, and remains, a poet, and a good one. Some of his poems have been chosen for the yearly anthology Best American Poetry, and I would argue that his success in other genres is because he is a poet, and brings to them his unique and imaginative language, that above all sounds new and fresh, and that contains his unique blend of humor, despair, exaggeration/hyperbole, such as that found in his latest book of poetry, What I've Stolen What I've Earned, from Hanging Loose Press.

Because his poetry has always been so accessible and new-sounding, I had always thought of him mainly working in free verse, forgetting that even in his first books he's at least playing with a kind of formalism, which he continues in this collection, with variations on his own invention, in what I call the prose poem sonnet, though which he simply calls sonnets. They are blocks of text in which each sentence is numbered, up to fourteen of course, though also of course he even breaks with his own rule on this when the story he's telling becomes more urgent and a numbered sentence can become a numbered section of multiple sentences, usually happening after the traditional 'turn' of a sonnet on the eight line. For example, the first part of “Sonnet, with Saxaphone”:
1. This poem doesn't contain a saxophone or any reference to music, played with or without the saxophone. 2. This poem, though written by a Native American, will not contain any reference to Native Americans or, more idiomatically speaking, Indian, or, speaking in slang, Skins. 3. This poem will not be funny. 4. This poem is very funny. 5. No, it's not....

He also sometimes breaks a poem/story into fourteen sections separated by line breaks, creating more of a collage, like in “Love Sonnet, Constructed by Wikipedia”:
1. Love is a universal construct related to affinity.

2. Affinity, etymologically, is the opposite of infinity.

What's interesting in any of his sonnet versions is how the effect ends up being a blend (or maybe the contemporary pop term mash-up is more appropriate?) of poetry with essay and/or fiction. In fact, many of the 'poems' in this collection could almost just as easily be labeled as flash fiction and/or 'mini-essay' pieces now appearing in some journals. And the question of whether they could be 'stories' (ie fiction) or 'essays' (ie 'true') is interesting. Poetry, unlike supposedly prose, has no fiction and non-fiction sub-categories. The difference here in Alexie's prose pieces seems to be whether the story that unfolds ends on something in reality (or real, therefore 'true'), or if he goes off into what could be called exaggeration though is really imaginative, like in “Sonnet, With Bird,” the best poem in the book, about the death of a friend:
….14. A gathering of quail is called a bevy. A gathering of Indians is called a tribe. When quails speak, they call it a song. When Indians sing, the air is heavy with grief. When quails grieve, they lie down next to their dead. When Indians die, the quail speaks.

Does that last sentence push what had been factually 'true' into fiction? Even though it is true? Is it factually true? How can you prove it's not? Does it depend on who wrote the line? Or who reads it? I don't know, but it's perfect.


In addition to form, another formalistic device Alexie works with in this collection is rhyme, along with a little rhythm. And he's pretty explicit about why in the 'poem' appearing midway in the collection, “Phone Calls From Ex-Lovers,” the longest piece in the book, which, again, if it were crammed into prose would 'pass' as an essay. Instead, it's mostly free verse in mostly three-line stanzas. And it mostly is indeed about when he was younger and an ex-lover called him, but Alexie uses that story as a starting point to talk about memory, and how or why we remember things. From there, the poem goes kind of way off track, speaking directly to the reader:
And yet, there is still something more

To say about this, and so I irritably
Reach for that thing, and I want you
To remember it, to encode it

In your primate DNA, and in order
For that to happen, my final message
Needs to rhyme. Yes, I'm sorry, but

Free verse isn't designed to be
Memorized. I mean, Jesus, if you want
Proof, just turn on the radio, tune

To a classic rock station, and sing
Along with every song you know.
Count those songs. Count the lyrics,

Count the number of choruses—rhymed,
Of course—that you have memorized
Without even trying. If you're a typical

American, you'll discover that you know
The lyrics to thousands of songs
And you know those songs so well

Because they have, say it, rhythm
And rhyme. Hell, memory itself
Works in rhythm and rhyme.

The poem then switches to prose:

And then he actually does just that. The 'poem' contains a list of 100 songs. Which, I sheepishly confess, I mostly all know, and could sing along with, just as Alexie says. As the 'poem' continues, and it switches back into free verse, he argues, again I guess, that free verse just isn't made to be memorized, nor is even this very poem, which, he claims, I guess seriously, that the poem (and not he?) “desperately strives to equal Springsteen, / Stevie Wonder, or Carole King,” and so, he returns, finally, (anti-climactically) back to the main story “Of Phone Calls From Ex-Lovers” and ends with a rhyming couplet, which I won't include here.

As a whole, the poem isn't successful, not compared to other poems in the book, but it reveals a lot about Alexie. And it's where I diverge from him. I feel his frustration that poetry isn't more well-received, and even his (disguised as his poem's) desire for recognition/fame. But I just can't take seriously his implication that Bruce Springsteen's song “Dancing In The Dark” has as much power as a good poem, and I say that as a poet and musician, a music lover, and a somewhat fan of Springsteen even. Because pop music tends to deal simplified versions of good ideas, at best, and cliches, at worse. And the rhyme almost always is more important than the ideas expressed. Not to mention that pop music has, well, music to back it up. A catchy cliché can get a lot of mileage off of a good beat. Alexie's experiment, rhyming, leaves him with just that: obvious sounding rhymes, which are all too obvious, for example, in the next poem in the book (and the worst), “Ode to Coffee”:
In the coffee shop, the dreadlocked white dude
Orders a complicated drink.
“Man, don't be rude
To that sacred liquid,” I think....

And so on. Can't be coincidence that Alexie put this rhyming poem right after his explanation of why he has chosen to experiment with rhyming poetry. If anything, the explanation/justification makes “Ode to Coffee” that much more obvious, therefore that much more worse. And it's not even funny? Even if some readers think so, poetry that relies on mere cleverness is a step down for Alexie, whose humor normally, to my mind, transcends to joy. I just don't like seeing him, seemingly hubristically, sacrificing his great sense of language for the kind of silly desire to have his poems memorized and somehow passed on to future generations.

Which makes me feel totally horrible, since most of the book is great, and Alexie remains one of my top five favorite contemporary writers. I said earlier that Alexie's poems 'could' be labeled flash fiction or creative non-fiction, but they do still feel like poems, though that may just be context (that is, they're in a book I bought in the poetry section) and Alexie's intention (that is, putting them in a book of poetry). Still, some of these pieces would fit fine in one of his short story collections. Though I say that and immediately think, well, these might stand out as being a little experimental since, however vivid and alive his short stories sound, in appearance look fairly standard.

All of which is an argument for how good a writer Alexie is, which makes me wonder why he went with Hanging Loose Press for this book, when I would think he could get a bigger poetry publisher. In an interview with Bill Moyers last year, Alexie stated that he likes to help support indie poetry presses by publishing with them, when, I assume, he could get a big publisher (of fiction) to put out his books through a poetry imprint. And that's fine and good, except I wish someone like Copper Canyon would pick him up, a company that would put a little bit more care into the design of its books. At first I thought What I've Stolen What I've Earned was an old early book of his that I had somehow missed, since it's design is so basic and bland. People do judge books by their covers, and this one doesn't do justice to the language inside. Plus I'm not sure Hanging Loose has the widest distribution range, though I could be wrong, and I only say that because I just want Alexie's poetry to be available to as many readers as possible. His is the type of poetry that appeals to hardcore poetry fans, but could also bridge over to folks that think they don't like poetry. I guarantee that anyone who has enjoyed his fiction would also like this book. Imagine if this book of poetry sold as much as The Absolutely True Diary of a Part-Time Indian. Thus, Alexie's perhaps frustration. I feel it, though he's probably one of the better-selling poets in the country. Which, I know, isn't saying much. I too want him recognized more widely. Or, that is, he is widely recognized. His poetry should be too—and poetry in general should be. But if it is, it's not going to be playing by pop music's rules. Poetry is never going to 'popular' just by its nature: it's language, ideas, thinking, on the edge of Being, forming it. That Alexie does this in such accessible language makes him one of the best poets we have. 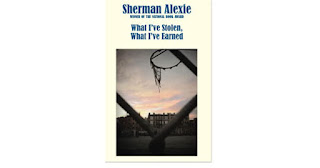