The end of the world is cold. And windy. No trees, just rock, boulders and shale. Patches of snow and sandy pebbles hitting my face. My plastic poncho supposed to be a windbreaker, but has really just turned into a big sail. I have to stop in big sudden gusts blowing down from El Paso Garner, Garner Pass, 'El Paso' for short. No trail, basically we're just heading up. With the altitude, I rest every twenty meters, bent over almost to the ground. A man recently died trying to hike over this point.

A huge gust hits, blowing me over and back. I twist mid-air somehow and land on my hands and knees, dragged, poncho choking my neck and flapping in my face.

Up ahead somewhere, I hope, are my two Australian companions, named, amazingly, Tristan and Hamish. They've been traveling in South America for about two months, basically trekking, camping out, The Inca Trail in Peru and Macchu Pichu, getting ripped off by police in Lima. Neither has picked up much español, so I've been useful, for once in my life, as a translator back in Puerto Natales where we met in one of the hospedajes. They accepted my presence matter o' factly and invited me along on an eight-day trek around the park, doing 'The Circuit,' a big loop in el Parque Nacional Los Torres del Paine. I'd only been thinking of an overnighter, have never done more than that, but said yes immediately. Amazing how that can change your life. We've seen the Torres, the Towers, huge skyscraper-like mountains, a climbers paradise, along with 'small' glaciers and glacial lakes filled with large chunks of floating blue ice.

I just graduated, barely, in December with a degree in creative writing, and the only story I could imagine for myself is working at a Border's bookstore the rest of my life. Nothing made sense except to revise completely, to leave, to go visit Chile, the homeland of Pablo Neruda. Why do trees hide the splendor of their roots? Maybe a last gasp, a last reward, a poem, before I join Real Life and grow up and be serious and stuff. So, from minimal savings I bought the ticket and walked through that gate in the Detroit Metro airport, expecting someone to say, Hey, you can't do that. Which is kind of what school had been like. But, no one did. And in Santiago, despite all the beautiful women, my instinct had been to get the hell out of there too, out into wilderness. My guidebook showed Los Torres del Paine, a United Nations Heritage Site, at the southern tip of the continent, of the world.

The Australians haven't laughed at me, at least not for any of that. They seem to be giving me the benefit of the doubt that I know what I'm doing, despite the fact that I'm in cut-off shorts, a Mötorhead t-shirt, and Converse High-tops. They do like to make fun of the States, and other Americans ('Why do American tourists dress like children?') which I am more than happy to encourage. Plus they're fellow Monty Python fans, quoting classic lines like 'She turned me into a newt' with much better British accents than mine. I had half-thought I might drop out earlier, and without them I surely would have. They've been teaching me, even just by example, how to properly trek. Things like planning out meals, reading a topographical (topo) map, and just drinking water straight off the glaciers, no need for iodine or filters (but cold). Also showing me how to tighten the waist belt on my mochila to get most of the weight on my hips, so my shoulders aren't screaming. Which makes my hip bones scream. But it's a good pain! Other things I've learned on my own, the hard way, like if you use a tarp, never put it under the tent. It should go on the ground inside, otherwise it actually catches runoff from the tent and funnels it into a puddle right underneath and you wake up the next morning with your butt in a puddle. Fortunately, neither of them are the gung-ho type that get up at five in the morning. Nope, we all crawl out at 9:30.

We had all wondered if I'd be warm enough, with no heavy jacket, just a rain shell, and I have been fine up to this point. Walking with a forty-pound backpack tends to warm one up. I've had it for a year and took it on a summer study-abroad in Mexico, but never really used it for a backpack. But here I am, mochilando, the first few days in low hills, snow-covered mountains in the background. Chile and the whole west coast of South America are like someone took the west coast of North America and flipped it over, and we're in the Alaska-looking part, though I'm Darwin, observing longer thinner dandelions, flower heads smaller, evolved differently down here. And with at least one completely new animal: the guanaco, related to llamas, same long neck and wooly fur, which browses in the grass like deer, but also jumps around on rocks like mountain goats, and has the same kind of hooves. Herds of them, or single ones just appearing over my head on a boulder, staring at me. Judging me.

Learning too the rhythm of trekking, of backpacking, of mochilando, aware of what's around me but processing thoughts and emotions, of girls, friends, girlfriends, jobs, school, life. They just flow on by, nothing I can do about them, all that is far away, nothing to get on with except the next step. And when I get tired of thinking (though you never do, really) I just come out of the trance and look at the mountains which have been there forever. My problems nothing, a speck of sand on the side of a mountain.

During this trip, people have thought I'm Canadian or Argentinean, which is fine by me, I'm kind of ashamed to be an American after seeing many US oil companies in Chile, and knowing about our government's involvement in the coup which overthrow Salvador Allende, a democratically-elected (though Communist and therefore automatically bad) president, who Pablo Neruda supported. One would almost start to think America was out to invade everywhere because of oil. But on one break, Hamish remarks, —Well, you're certainly the quietest American I've met. Most go on and on, gabbing away.

Which I'm proud of. But we do talk. Hamish the free spirit type. Long black hair and a beard which he's been growing since he'd arrived in South America. One of the skinniest people I've ever met, and I'm pretty scrawny. I don't know how he hikes so far and fast with those chicken legs. He's still going to college, but I get the impression it's an on/off kind of thing. His girlfriend is an exotic dancer, which I would think would be both exotic and nerve-wracking while away on another continent for two months, but seems neither to him.

Tristan the more serious and quieter of the two. Long Elvis side-burns and the shortest hair of the three of us. In graduate school for psychology, he's going into clinical psychology to actually, like, help people. What a concept. But he still indulges his love of travel. He's seeing a beautiful young woman too, and keeps a picture of her in his passport so when a customs official wants to check his papers, her picture falls out and the guy forgets about hassling him. This actually happened at least once, I guess.

This whole trek I've still been expecting someone to jump out from behind a boulder and pull a Monty Python on me: 'Right! Stop that! You're being much too silly!' But thanks to Tristan and Hamish I've been starting to feel a little normal. Or, not alone in my silliness.

I rise, staggering, my poncho now just a cape, both hands on the ground, wondering if I'm about to be blown off the mountain. More sand in my face, trudging, long bloody slice in my left knee: the mountain has claimed a blood sacrifice.

And then I'm not walking uphill anymore, facing a vast sea of ice, grey and blue and cold. Glacier Grey. Beyond it, surrounding it, the Andes Mountains. We've been hiking through mountains the whole time, but these are MOUNTAINS. Tall vast dense hunks of planet with ice and snow on top, in huge CLOUDS. And I'm looking across at them. The end of the world. Nothing can be beyond those clouds. This is where reality creates itself. And is destroyed.

The wind doubles. The end of the world isn't going to let us live.

My Australian companions are having a grand ole time, of course. When I catch up, they're sitting behind a boulder, grinning away. As I collapse next to him, Hamish says, —That's more like it. I was beginning to get worried this would be a lark.

Tris grinning too. — Isn't this great? I got blown over on my back. Good thing I landed on my pack. Gawd, I never expected a view like that!

I cower in a ball, my poncho ripped to shreds, knowing I'm going to die, either right there, by being blown off back down the mountain, or else when we go into all that ice and cold and cloud. Those are the real Andes over there and I am shamed and unprepared, desecrating a holy place.

Tristan turns to me: —We're thinking about walking a little bit further then stopping for lunch.

—Great! Let's get the hell out of here!

I run, shooting down the slope, expecting snow and ice any moment. If I'm going to die, it won't be crawling. Tris and Hamish come behind, jumping into the wind, laughing.

And, the wind lessens. Still strong, but only in a cold way now. And, instead of snow and ice, a field of thick green moss appears, covering over all the rocks. Far below, a forest of reasonable-looking non-snowy pine trees. Maybe we aren't going to die after all. I take big spongy leaps down, unable to stop staring at that huge GLACIER. We find another little protected nook behind a big boulder. Tris loans me a sweater, and we sit on mossy rocks with the best view in the world. Glacier Grey just like its name, with huge blue cracks and fissures. I'm looking down a long ways, those cracks must be canyons. I get a chill, imagining falling into one, lost in blue ice caves, the glacier moving and crushing me like nothing, which I am.

None of us speak for a while, none of us stop staring.

—You guys, I gotta confess, I was scared up there.

—We just saw the face of God.

Hamish gives me his most pseudo-aristocratic Australian-snob look. —Bah. Rubbish. Someone's been watching too much Hollywood tripe. Or should I say Holy-wood? That wind wasn't a bit over a hundred kilometers an hour. Oh, sorry, divide by eight, multiply by five to get whatever the US is still using. It was a stroll. A doddle, if you will. If you Americans don't have some fortitude, who will want to be policed, watchdogged, big-sticked, or new-ordered by you? You could learn a bit from us Crocodile Dundee types, you could.

I break out a huge chocolate bar I've been saving, filled with mint cream, the most wonderful candy bar I have ever eaten. 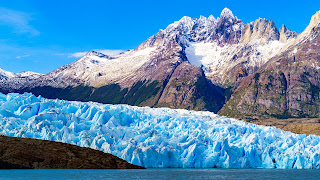