Appeared August 2018 in MOJAVE HEART REVIEW, which is alas no longer with us.

Ryan pulled in the money, smiling, cigarette hanging out of the side of his mouth. —Mi amigo, you quit too soon. The night is joven.

Matt stood up and grabbed his hat, putting it on. —I’m gonna grab a smoke outside. Anyone?

Ryan shook his head, collecting the cards and shuffling. —We’re not stopping now. Not when I got my game on. The rest of you vatos ready to lose your dinero too?

Matt walked past Jamie reading People on the couch and went outside onto the porch, lighting up and blowing the smoke up into the sky. Stars everywhere. Crickets. A television from one of the other trailers. Professional wrestling.

He looked back through the screen. —Yo.

—Why don’t you go make a beer run?

Matt turned away from the screen, took a last drag and dropped the cigarette and ground it out. Ryan yelled out, —Hey Matt, you want to take Jamie?

The screen door flew open and Jamie came out. She had put on her boots, though was still in shorts and a halter top. She had her purse, checking inside for something. —Let’s go.

They got in his pick up, and he turned on the cd player.

—Is this Shania Twain?

—You listen to Shania Twain?

—Is it because she’s hot?

—Does Ryan know you listen to Shania Twain?

—Why does it matter?

She shrugged. —I don’t know.

—Then why did you ask?

He looked at her a second, then backed out of the driveway and headed up the hill out of the valley.

—What was that look for?

—Are you mocking me?

—Mock? What does that mean?

—You know what it means Matt Wattley.

They got to 87 and he stopped at the sign. The Mogollon Rim off to the north. Dark cliffs. Storm clouds, up on top. A flash of lightning. He turned right, heading south down to Payson. The windows were down, and the cool air blew in. She rolled up her window. —Jeezuz fucking christ! I’m fucking cold!

He rolled his up, leaving a little space so the air still blew on his face. —Why didn’t you wear a jacket?

They got to the Payson city limits, then through the traffic circle in front of Wal-Mart.

—Why do you have a Toyota?

—What do you mean why do I have a Toyota?

—I mean why do you have such a small truck?

—What do you mean why do I have a small truck?

—Yeah, you know what conversating is?

They passed the turn off to the airport on the right and were in town.

She crossed her arms. —Ryan’s got a diesel.

—Yeah, I fucking know Ryan’s got a diesel.

—You know how much diesel costs now?

They got to the 260 intersection. He drove straight, still going south.

—Ain’t you going to the Beverage House?

—I want to go to Rim Liquor.

He looked at her quickly. —Cause. Like the same reason it’s funny there’s a store up in Flag called Beaver Liquor.

She thought about it a second. —Oh.

They passed the Post Office on the right and he turned left into the Rim Liquor parking lot.

He parked and turned off the truck. He looked at her. —You don’t get it, do you?

She looked at him. —What?

—Yeah. Kinda. I get the beaver one. Is it like the other side?

He kept a straight face. —Of what?

She smiled. —Of the beaver.

—Matt Wattley, you are the most perverted motherfucker I’ve ever known.

They got out and went in the store. Bottles and bottles lined up along both aisles. He nodded to the cashier as they walked to the coolers on the far back wall. He stood looking at the beer. She hugged herself. —Fuck it’s freezing in here!

She smiled. —Fuck you! Hey, do you remember back in high school?

He shrugged. —Do I remember what?

—Like how we all used to get at keg and go up to Milk Ranch Point and have parties?

—What ever happened to Teresa?

—You know. She went to ASU.

He opened a cooler door and grabbed two cases of Bud, one in each hand. —Nothing. She left and it was over. She said she liked Phoenix.

He looked at her. —Last she said, she’s going to get a masters.

He started walking up front. When they got to the counter she asked for a fifth of Jim Beam and a pack Marlboros, and put them with the beer. Matt stared at her. She added a pack of gum. —Don’t worry. Ryan’ll pay you back.

They left. He put the beer in the back of the truck and they got in. He started the truck and pulled out back onto 87, heading north.

She opened the Jim Beam and took a swallow.

—Hell, I’ve seen you puking your guts out, so don’t get all superior on me.

They stopped for a red light at the 260 intersection. The clouds had come down off the Rim. More lightning. Rain drops starting to fall on the windshield. He started the wiper. The light changed and he drove.

He looked at her quickly. —Oh shit. What do you mean? We’ve known each other forever.

—I know. But you don’t ever talk to me anymore.

—Well, we’re out of school now.

—So we got jobs and shit. And you’re Ryan’s girlfriend. Shit, I don’t talk to a lot of people no more.

She took another swallow. —I know. Me either. Hey! Turn here!

He turned left on Airport Road. —Where we going?

—Up to the airport. Trust me.

They started up the steep part, and when they got up on top of the mesa she had him turn left onto the road up to the water tower. —Turn in here to the parking lot!

He did, facing the truck north, towards the east side of the airport and the Rim, though it was almost hidden, until a flash of lightning lit up the whole area.

He kept the wipers going and lit a cigarette, offering it to her. She took it and rolled down her window a crack. He lit another for himself. Another flash of lighting. The rotating green light next to the runway.

She exhaled. —Have you ever been up here?

—Yeah. My dad used to take us up here, like on nights like this. Or like when the monsoons come in the afternoons, you know, like in July. Or like, when they get fires. You can see the smoke and there’s helicopters taking off and stuff. You’ve really never been here?

—No I’ve seen the fires though. Remember that one out on Promontory? You could see it glowing at night.

They sat for a while. More lightning.

—Matt, how come you never asked me out?

—Just, why the hell are you asking that?

—Yeah I know that already. I mean, before. After Teresa left.

—Well, maybe I wasn’t in the mood then.

—Oh. I thought maybe it was because I wasn’t Mexican or something.

—Jeezuz Jamie, what kind of stupid thing is that to say?

She tossed her cigarette out and rolled up the window. —I don’t know. Ryan’s all into mexican girls. Doesn’t he talk about them to you?

—I mean, we just talk about girls, period.

He tossed out his cigarette. —We better be getting back.

He started the truck and turned out back on Airport Road and down the hill. She took another drink of Jim Beam. They got to 87 and he turned left, heading north. The rain lighter, but steady.

—Oh shit. Too much information.

—Oh I’m sure, Matt Wattley. You’re the one that likes butt-licking.

—I never said that.

—Oh shit. You going to go to college using all those fancy words?

Neither of them said anything for a while. She looked at him. —But seriously, doesn’t he ever talk to you about that?

—About being with two girls and stuff.

—He doesn’t ever talk about me?

—Do you ever think about being with two girls?

He turned left back down into Verde Valley Estates. Another flash of lightning. He pulled into the driveway behind all the other trucks. After he turned off the truck he leaned over and kissed her.

She jerked back and pushed him away. —Matt! What he hell are you doing?!

She picked up her purse and put the bottle in it. He leaned back and turned and looked out the side window. —I thought that’s what you wanted.

—What the hell made you think that?!

He looked at her. —Are you serious?

She stared at him, holding her purse to her chest. —What?!

He didn’t say anything. She moved to open the door, but stopped and looked at him again. —What?!

He grabbed his hat and put it on. —Nevermind.

—What do you want me to do?

They sat there a second, then she opened the door and got out.

He opened his door and got out. She was already running for the door, covering her head with her purse. He grabbed the two cases of beer and followed after her. 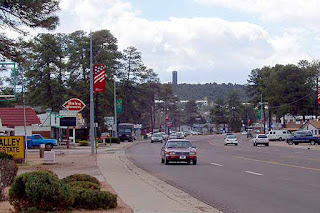